The Pittsburgh Symphony: A History in Maestros

September 1, 2016UncategorizedBy Musicians of the PSO 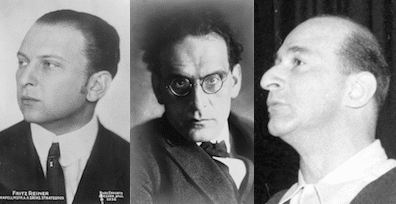 History is a broad subject, and for any orchestra the river of events brings together many currents: community, commerce, culture, education, world events. We Musicians of the Pittsburgh Symphony Orchestra intend to explore many of these currents in future issues. Everyone is interested, though, in the Maestro. From the musician’s point of view, it is sometimes hard to know at the time whether things are going well or not, but, looking back, it seems evident that the Pittsburgh Symphony has benefitted from a succession of influential music directors.

It is orchestra history, which is to say that nobody alive remembers it, that the PSO was founded in 1896, hit a rough patch during the Depression, underwent a formative period under the brilliant but unstable orchestra builder Otto Klemperer in 1937, and was further trained to greatness from 1938 to 1948 by one of the 20th century’s most renowned and brutal conductors, Fritz Reiner. Reiner secured tours, recordings, and premieres of works by composers like Stravinsky, Morton Gould, and Arnold Schoenberg. Reiner was adventurous in his programming and enjoyed an especially close relationship with Bela Bartok. Although the Boston Symphony commissioned and premiered Bartok’s Concerto for Orchestra I’m 1943, it was the Pittsburgh Symphony that first recorded it with Reiner in 1946.

It was this stature that allowed the PSO to attract eminent guest conductors to bridge the gap from 1948, when Reiner left for the Metropolitan Opera and Chicago Symphony, to 1952, when William Steinberg was engaged. Bernstein. Stokowski. Charles Munch, Paul Paray, Victor de Sabata. But the arrival of Steinberg brought a new kind of identity to the ensemble, as Steinberg’s devotion to the PSO was ended only by his own death. For 23 years from 1952 to 1976, the orchestra continued to set milestones. A 250 percent increase in audiences by 1961. Entire seasons sold out by subscription. A historic 11-week, 14-country, State Department-sponsored tour of Europe and the Near East in 1964.

Steinberg’s PSO was, according to recently retired PSO Co-Principal Clarinet Tommy Thompson, a very disciplined orchestra cast in a European mold. ”Steinberg was very particular about how everything sounded,” Thompson said. “And it was a very regimented approach. We all wore suits and ties to rehearsal. When Previn came, the suits and ties mostly disappeared.”

The appointment of Andre Previn as music director in 1977 was one of those moves that some viewed askance at the time but that in retrospect was a perfect fit. Previn took the polished, accomplished, European PSO, put it on the red carpet, and added a splash of jazz. ”Ticket sales were even better with Previn,” said Thompson. ”He was glamorous. Not only was he a truly great musician who brought a lot of new music to our repertoire, if you came to a concert, Mia Farrow might be there. And he was our maestro, but in his own mind he was just one of the cats. He played chamber music concerts with us. You could approach him about anything.”

Previn’s flair and connections brought the PSO into the TV spotlight with the Alcoa-sponsored “Previn and the Pittsburgh” PBS specials. All of which left an enormous canvas for Lorin Maazel, who arrived in 1984 and focused with furious intensity on building the orchestra’s technical accuracy and brilliance. Through his hiring of key players for principal positions, his ruthless seeking out of technical weakness and his own formidable technique, Maazel sharpened the ensemble to a razor’s edge. Which played extremely well to audiences worldwide. ”Being in Maazel’s orchestra was not necessarily a comfortable experience,” said violinist Chris Wu. ”You never knew when his laser attention would be on you, because he heard EVERYTHING and had a photographic memory. But playing a concert with him was exhilarating, because you knew that you were performing, as an orchestra, at the highest level. He would accept nothing less.”

When Mariss Jansons took over in 1996, the PSO made a change that may have seemed small, but that signaled a fundamental shift in relationships. For the first time, when standing for bows, the orchestra turned so that every member directly faced the audience. ‘”Jansons said from his first concert, ‘Applause is between you and the audience, not between me and the audience,'” said PSO Principal Piccolo Rhian Kenny. “He wanted us to focus on the audience so that the audience would focus on us. I think a lot of how we today relate to audience members as individuals and friends and how they relate to us as individuals and friends started with that simple gesture.”

Jansons continued to build the PSO’s worldwide reach with tours and recordings which bore his unmistakeable flair for the dramatic. His Shostakovich recordings in particular showcase the marriage of the PSO’s precision and Jansons’ full-blooded interpretation. ”Maazel built a Ferrari,” said Tommy Thompson. ”Jansons took it to the track and drove the snot out of it.”

After three years with the trio of Sir Andrew Davis, Yan-Pascal Tortelier, and Marek Janowski sharing conducting duties, the PSO once again became the work of one man when Manfred Honeck was appointed music director in 2007. Continued acclaim at home and abroad, and a series of Grammy-nominated recordings validate his leadership, which blends a deep kindness rooted in personal faith with, if possible, an even greater flair for musical drama, and a willingness to explore the extremes of musical expression, whether it be dynamics, tempo, tone color, or phrasing. Under his baton the PSO has continued to grow artistically, and further spread the reputation of Pittsburgh as a city of vision. Said Classics Today in a recent review of the Beethoven CD (link), “Let’s be honest: there simply is no finer ensemble in the world today, even if it may sound controversial to say so. From top to bottom the Pittsburgh players reveal themselves as equal or superior to anyone out there; and when led by a charismatic conductor like Honeck, they have few if any peers.”

History? Looking back reminds us, we are making history every day.