December 30, 2019UncategorizedBy Musicians of the PSO 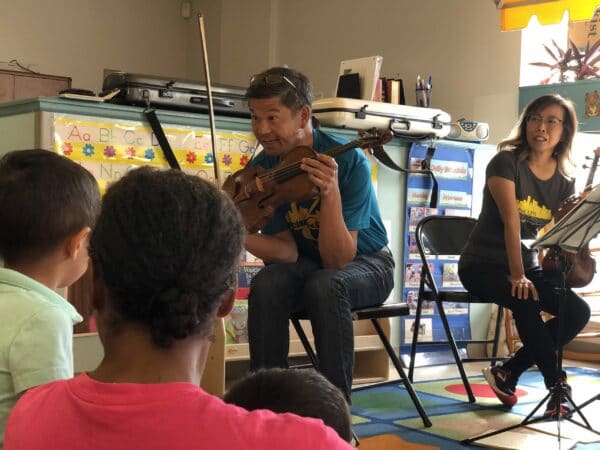 Violinists Chris Wu and Susanne Park at the John Heinz Center for Early Childhood at the Jubilee Soup Kitchen during the 2019 Day of Music. Photo by Rhian Kenny

The PSO’s vision statement reads: “Great Music in Every Life.” The “Great Music” part is pretty well covered. If you can get to Heinz Hall and can afford a ticket (BNY Mellon Grand Classics tickets start at $20, but some concerts are less, or even free), an embarrassment of riches awaits. In the course of a given season, there will be an orchestral program to suit almost any taste, performed at the highest level. If it seems immodest to say that ourselves, a lot of other people who ought to know said it first.

The “Every Life” part can be a bit harder to live up to. An orchestra belongs in a hall and that’s our first line of defense, to get everyone we possibly can to come to Heinz Hall and experience the PSO in full flight. We play plenty of chamber concerts with exactly that message: “If you think that was great, you should come hear ALL of us.” Not everyone has the same options, though. We believe strongly that music can change lives. Our community has made an investment in us, and if we can use our musical abilities to improve our community, perhaps that might be considered a return on investment.

It would be easy for this article, in an attempt to convey the depth and breadth of the Musicians’ commitment to this idea, to read like a laundry list. To be fair, and to make an important distinction, there are initiatives that the Pittsburgh Symphony Orchestra’s Community Engagement department organizes that address community needs and for which we play and/or teach as part of our employment. But we do more than that, not because we have loads of time and are happy to go everywhere and play for free, but because we see needs where we live and we want to help.

Broadly speaking, there are projects that the Musicians of the PSO (big M) undertake as a group, and projects that individual musicians (small m) organize. For instance, the 2019 (4th annual) Day of Music, with 19 chamber music performances in 18 locations including hospitals, T stations, retirement communities, and soup kitchens, was presented by the Musicians as our gift to Pittsburgh. Also the at least 25 Body and Soul performances in 2019, where groups of us traveled with a 412 Food Rescue delivery truck and played for the residents of communities receiving food. Every year the Musicians organize a Care Fund SideXSideXSide concert with students at a school that is receiving money for instruments. Last year’s concert at Dilworth Traditional Academy was a particularly successful collaboration.

When Principal Piccolo Rhian Kenny organized concerts at the Allegheny County Jail and the Shuman Juvenile Detention Center, and when violinist Susanne Park arranged a concert for children at the Crescent Early Childhood Center in Homewood, and when violist Penny Anderson Brill played for Journey of Hope (undocumented, unaccompanied minors), those were individual efforts. As individuals, we reach deep into our communities and can respond quickly to needs. Some of us are more active than others but there are nearly 100 of us so there are more projects that could be listed, but at some point it becomes, well, just a list.

What is missing from a list is the thing that connects all of the experiences, that makes playing music for people who wouldn’t hear us otherwise not merely rewarding, but essential. People playing music for each other has been at the very core of humanity since humans coaxed the first musical sounds from a reed or jawbone. Music travels through a very deep channel in our nervous systems. As children, we hear music and know we are cared for and included. Music serves both as a highest expression of civilization and as comfort and nourishment when there is no other comfort and no other nourishment. In Heinz Hall, we’re solidly at one end of the spectrum. At a soup kitchen, we’re a bit closer to the other end.

Musicians of the PSO in Vietnam
September 2, 2016
Recent Posts
Sign Up For Our Newsletter, Appassionata!
Archives
Recent Comments
Categories